U13 BOYS LOOK TO IMPRESS IN DALLAS CUP DEBUT 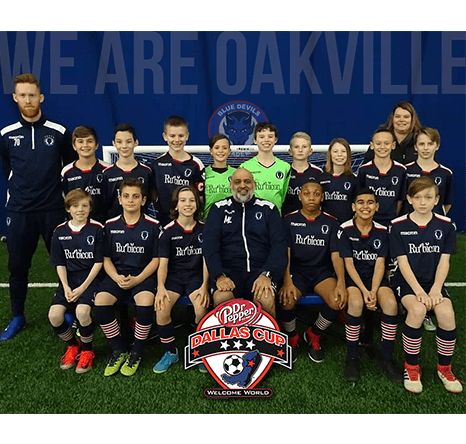 DALLAS, TX — The Dallas Cup is celebrating its 40th anniversary this year and our U-13 Boys have made their way down to the Lone Star State to participate in this World Class Showcase Tournament. Oakville Blue Devils Online caught up with Head Coach Makashe Lal as he was preparing to leave for Texas.  This will be an opportunity for these young boys to test themselves in a setting that has seen some of the world’s best players compete over the years.

What is it that makes the Dallas Cup so special for these young boys?

Well the Dallas Cups is probably one of the most prestigious soccer tournaments in the world for youth, its been around for 40 years, and we’ve always wanted to give our kids the opportunity to showcase at the best tournaments around the world. The Oakville Blue Devils, and previous to that the Toronto Lynx have always put kids into The Dallas Cup, and our 2006 Boys went to the US Cup in Minnesota and this was next on our list for exposure for these kids.

Tell us a little bit about that exposure that these boys are going to be receiving while they are in Texas.

We have a philosophy here with the Oakville Blue Devils that instead of beating the guy next door we want to go and see how we do against the rest of the world, and our boys are in for a tough, tough challenge playing against some of the best players in the world, and it’s not necessarily what we’re used to here in Canada it’s experiencing against players from England, Mexico, Brasil, and the USA, and these guys eat and breathe soccer, and it’s something that we want our kids to experience. At the same time you’ve got coaches looking at players from 15, 16, 17 years up. So this will be their first kick at the can with the Dallas Cup and we plan on going back in a couple years.

This trip will be a very immersive experience for these boys, what will the day to day be like for your team as they head down?

The whole experience is a professional experience for these guys. From the moment we arrive to the moment we come back home it’s all about the players being professional on the field and off the field. So we have a very extensive schedule, everything from daily meetings, in our meeting room, their homework will be done there on a daily basis, we have video analysis happening there, and whiteboard sessions. The players are going to watch the U-19 Super Group. Liverpool is there, Arsenal is there, Tigres from Mexico is there. So they are getting the whole experience from that perspective. On the Sunday they are part of the opening ceremonies where they march out in their Oakville Blue Devils gear with their Canadian flags, the Oakville Blue Devils Flags, with 248 other teams, and experiencing the whole event.

With so many incredible teams participating in this tournament who will The Oakville Blue Devils FC be matched up against?

So the way that they’ve structured the scheduled is that each group has one team from the host state, so we’re going to be playing against Solar Soccer Club from Texas, a very strong club from Texas. One team from out of state, so we will be playing the champions from Oklahoma, and two international teams, so ourselves being the Canadian team, and a team from Mexico, the Houston Dynamo Academy from Mexico. I’ve done my homework on the teams thus far and based on paper it’s tough competition. More than anything it’s going to be one heck of an experience for these guys to see how others play around the world. We’re asking our guys to compete, I believe we have a very strong team, but at the end of the day anything happens, it’s football right, it’s two 40 minute halves, let’s see what happens.

One of the things we keep hearing about this group of boys through our own social media channels from your opponents is that this group exudes an air of professionalism and demonstrate true sportsmanship can you tell us where that comes from?

We started this core team as the Burloak Soccer Academy when they were 6 years old, and our biggest ingredient has to be the quality of player, not just on the field but their mentality, so what we’ve instilled in these boys is professionalism. How we warm up, how we look, how we treat opponents, how we treat officials, on and off the field. We have been known wherever we go whether it’s the US Cup in Minnesota, or the Ontario Cup, wherever we go, whether its to watch our League1 Ontario team, it’s the standard of professionalism, and we’re very proud to say that. All the teams that we see in Ontario, that we’ve known over the years is that our boys hold themselves at such a high standard. So we’re big on that, we know that we’re playing against some Academy’s that have a little bit more facilities or may have more financial backing where they’re used to the team meals all the time, but when we’re together we treat them like that all the time. As in they do everything together, they do a lot of off the field comradery stuff, team meals, look the part, they have to dress the same, It’s the whole team thing of they have to look the same, I compare them to Arsenal or Liverpool or any big club in the world, you all look the same. There’s a reason why you all dress the same and that’s why our boys – we don’t believe in one superstar, we don’t have a superstar, when on the field we have 11 players and they play for each other, and that’s been our whole mantra.

If there was one thing you’d want the boys to take away from this experience what is it?

The biggest thing I want for them to take away from this, for them to see, is where they sit compared to other teams around the world, to prove to myself and themselves that they can compete,  and to take away from what they all need to do to get better as soccer players. Winning and losing is irrelevant, at the end of the day, where are we now and what do we have to do to continue to improve.

As a coach what are you hoping to achieve?

As a coach, I would love on next Saturday to be in Toyota Stadium in the final. I know it’s going to be a tough battle, but I want to learn where we sit as well. It’s great we beat teams in Ontario 5, 6, 7 – nil, or battle with 3 or 4 real good academies and clubs here, but I want to see where we sit against Houston Dynamo Academy, where we sit against Solar, and what they do, and how they play. I want to learn from others as well. At the end of the day the game is the game, but what can we take away from someone else and what they have? Maybe there is something we can take away from Dallas and how they run their training sessions, or facilities. We’re very fortunate that we’ve booked training facilities there when we’re there. we’re working with some people to learn off each other. So I want to bring back here something good to improve our players in the long term.

The Oakville Blue Devils FC will play their first game on Sunday April 14th against Solar FC, on the 15th they will be matched up against Oklahoma’s TSC Hurricane, and then on Wednesday the 17th the will face the Houston Dynamo’s Mexican Academy. The winners of each group and one wild card team go on to the playoff rounds of this invitation only tournament.

There are still spots available on several rosters with the Oakville Blue Devils, and if you think you might be the next Blue Devil you can register “here”.

Good Luck Lads. We are all behind you. We Are Oakville!