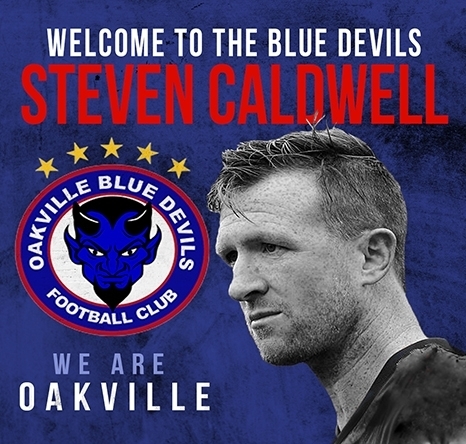 OAKVILLE, ON — For the modern footballer, there is no one “clear cut path” to professionalism. Oakville Blue Devils FC’s new President Steven Caldwell can attest to that. The Stirling, Scotland born defender rose up through the ranks at Newcastle United, and got his professional debut under Bryan Robson, playing alongside legends like Alan Sheerer, Shay Given, and Gary Speed.

In his time at St. James’ Park he was part of a club playing Champions League matches against the likes of Inter Milan and Barcelona. But it wasn’t all matches at the San Siro, and Camp Nou. He had several loan spells to lower league side before becoming an automatic on the team sheet, even still that didn’t come until he moved on to Newcastle’s arch-rivals Sunderland. Caldwell’s career trajectory was never straight to the top, and they rarely ever are. Steven can speak to the agony of relegation, and the absolute thrill of captaining his side to Premier League promotion.  Along the way, Caldwell managed to find time for 12 Scotland International Caps in two World Cup Qualification rounds before ending his career captaining TFC.

Now that he has hung up his boots, and he’s allowed to plot out his own future, he wants to use his experience to help a next-generation cut their own path. There was no secret to his success. Determination and work ethic is what got him as far as he did. “We want to improve the entire program not just tactically and technically, but psychologically as well. Teaching these kids of the GTA, the Oakville, the Halton area, what it really means to be a professional football player. How much intensity that takes in training, and how much focus and dedication is needed.”

Part of Steven’s decision to come on board with Oakville Blue Devils FC was because of the ambitious group that he will be working with. “I am joining an already successful team of qualified and experienced individuals in Duncan, Billy and Shen and I will look to lend my support in all areas of the soccer club.” Blue Devils FC Head Coach Duncan Wilde is a product of first the City and then United Academy’s in his native Manchester. His counterpart on the touchline is another Scotsman – Billy Steele, who plied his trade with Norwich City in the ’70s. Caldwell believes it is the sum of that whole which will work together in the clubs efforts to provide young athletes in Southern Ontario with the greatest possible opportunities. “Through our vast list of contacts both in North America and Europe and some unique ideas in grassroots soccer, we hope to take an already outstanding program even higher and become a leader in soccer throughout Canada.”

While Steven’s connections from his playing days will be an asset to the team, possibly his greatest contributions will happen in the Board Room. Upon his retirement from playing the game, Steven moved into the role of Director of Corporate Development with Maple Leaf Sports and Entertainment. “My experience at Maple Leaf Sports and Entertainment allowed me into all sides of the game, not just the playing side and the technical side of it.  Obviously, a lot of my work was with partnerships, ticket sales, community, everything that goes into Toronto FC, and the successes that they’ve had.” All of these experiences will prove valuable as Oakville Blue Devils will look to build their brand in 2019 and beyond. “I’m very, very excited about what’s to come. We have a long road ahead of us, and a lot of difficult jobs, but we feel we can create something very very unique in Canada.”

Welcome to Blue Devils FC Steven! We Are Oakville!