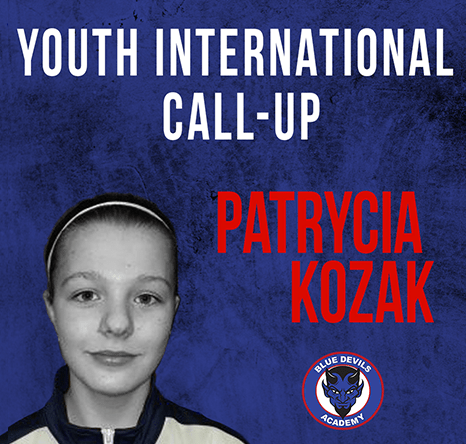 Oakville, On – Oakville Blue Devils FC confirmed on Monday that Patrycia Kozak has been called into the Polish U-15 Women’s National Team training camp for March 2019.

Patrycia says that she walked into her house after school last week and her mother told her the news. “I was literally about to scream. It was amazing.”

It was only a few short weeks ago that the Polish National set up was made aware of Patrycia via her Instagram account. She is eligible to play for Poland through both her parents having been born in the European nation.

Kozak is leaving for Poland on Wednesday with her mother and will be joining a squad that has previously gathered on 3 other occasions. While she has herself never been to Poland she is “extremely happy” to have received the invitation.

The Blue Devils striker believes her greatest assets are her movement off of the ball, and her willingness to chase down any ball and try to make something happen. She sites Poland’s Robert Lewandowski and Canadian Christine Sinclair as two of her favourite players.