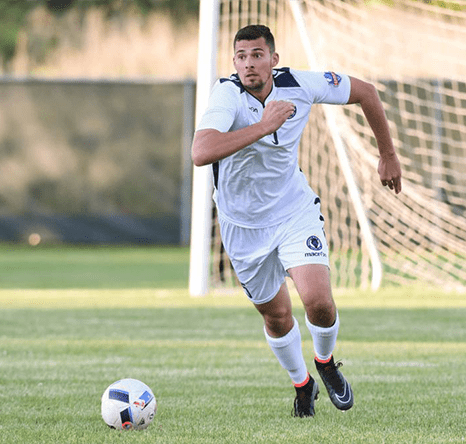 Crawford had previously served three seasons as an assistant coach for the Riverhawks.

Eric Crawford competed for the Oakville Blue Devils and was instrumental in the team’s 2015 League1 Ontario Championship and Inter-Provincial Cup. He was also named as a League1 All-Star in his 2016 season for the Blue Devils.

Looking back on his time with the Oakville Blue Devils, Crawford describes the impact Head Coaches Duncan Wilde and Billy Steele had on his career as both a player and as a coach.

“Duncan and Billy have been great to me both as a player and to learn from as a coach. They set me up to be able to get the scholarship I was looking for to the US, they gave me my start in the USL Premier Development League (PDL), and League One and helped propel me into an All-American. After my university career was over, they were instrumental in getting me professional opportunities and trying to set me up to chase the pro soccer dream. Upon switching to the coaching ranks, they have been great contacts for recruiting, and I have stolen quite a bit of information in terms of tactical knowledge, practice plans etc. that has helped me build a winner in NSU and hopefully will do the same at GSW”

Additionally, Crawford had a distinguished career with the Toronto Lynx of the PDL before competing for Northeastern State University, where he became the most decorated student-athlete in the school’s history. Crawford played 70 career matches and made 68 starts for NSU; captaining a back line unit that recorded the three best defensive seasons in NSU history and also helping to lead them to two NCAA Championship appearances.

Crawford has big goals for the Riverhawks and looks forward to building a perennially competitive program. As a Canadian player who has competed at the American University level, Crawford knows the breadth of talent that Canada and subsequently the GTA have to offer, stating “I know that there are good players especially in the GTA area, and most are just looking for the opportunity to play. At GSW, I will hopefully be able to pull some game-changing talent from the Blue Devils organization, but I will continue to help try to place players in situations where they can be successful.”

The Oakville Blue Devils would like to congratulate Eric Crawford on his appointment as Head Coach and wish him success in his new role.