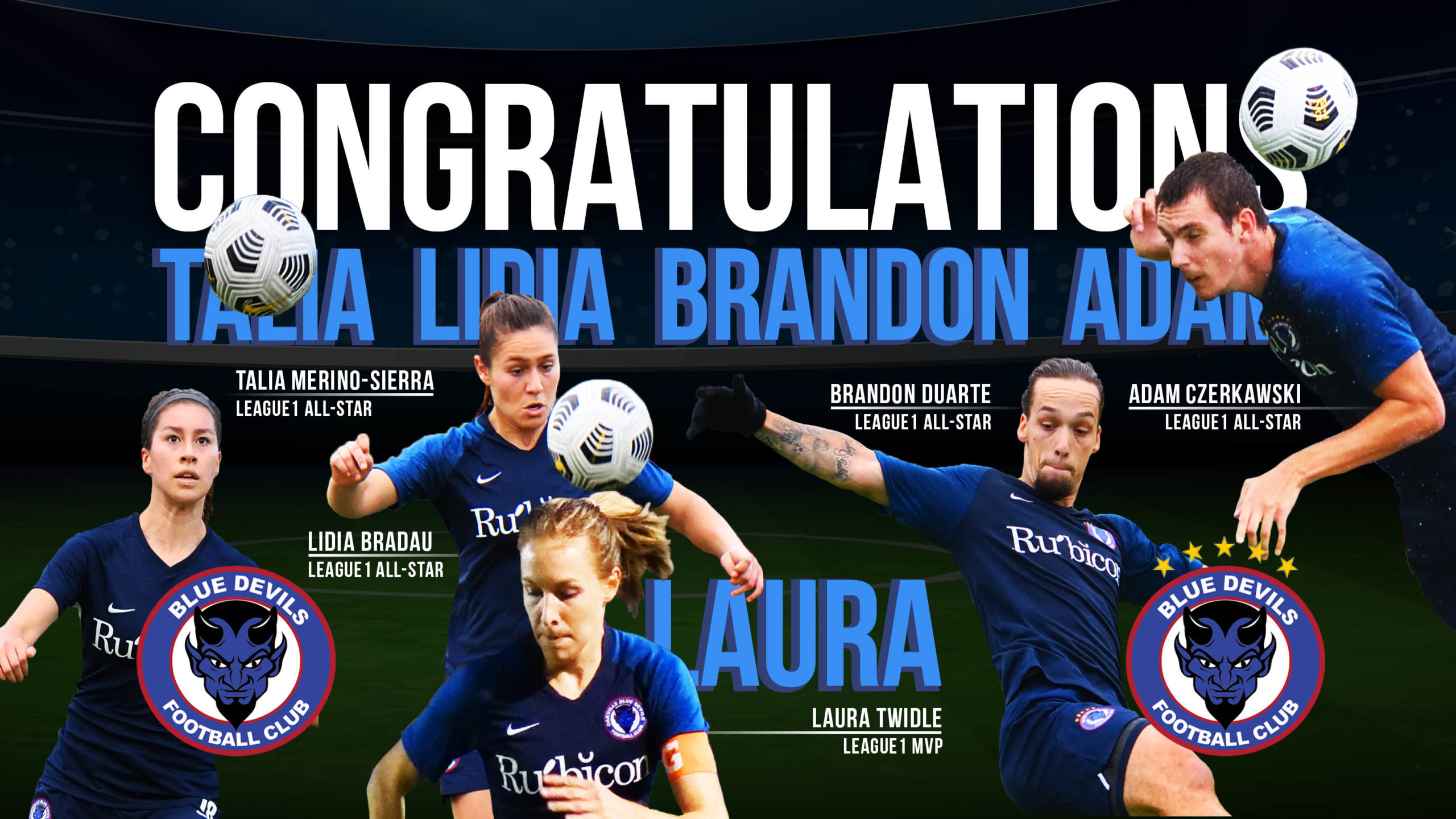 Following succesful League1 Ontario campaigns for both the men’s and women’s teams, five Blue Devils FC players have been named to their respective Male and Female All-Star Teams.Laura Twidle is virtually an automatic selection year-after-year, and this season she was not just named to the League1 Ontario All-Star Team, but was also named as the league’s Most Valuable Player. Selected alongside their captain, were defender Talia Merino-Sierra and midfielder Lidia Bradau.Women’s Head Coach Natalie Bukovec looks back fondly at the 2021 season and has kind words regarding the standout performances of her players. While everyone talks about attacking players, defenders rarely get the praise they deserve, but Bukovec is quick to point to the development she’s observed from Merino-Sierra this season, “As a former OUA All Star, Talia has been a player I’ve had the opportunity to see tremendous growth in since her playing days at McMaster University.” she continues, “She is a player who is so versatile and can impact whichever role she is placed in, but this year, was the iron pillar for us in the back line which supported our journey to the League1 Finals”.Likewise, Lidia Bradau was invaluable in the middle of the pitch for the Blue Devils and gives one the impression that the honour means quite a bit to her, stating, “When you look at the amount of talent on the All-star teams, and the league in general, it shows a promising direction for Canadian soccer and makes me proud to be a part of League1.”The women weren’t the only ones getting plaudits for their play in 2021. Blue Devils Academy graduate Brandon Duarte recieved his second successive selection while newcomer Adam Czerkawski was also selected last season.Men’s Head Coach Duncan Wilde has watched the development of Brandon Duarte since he joined the academy as a teenager, “Brandon has established himself as one of the top midfield players in League1 Ontario”, continuing on to say, “His consistency of performance over several years has been a major reason that our team is competitive every season.” Duarte finds it bittersweet since he prefers championships over individual accolades, “Obviously the main goal is to win trophies but getting these individual awards also shows that the off-season hard work pays off.”While Czerkawski only joined the club at the mid-season mark he solidified a back line that had begun to show some wear as the season progressed, “Adam has had an outstanding first season with us”, says Wilde, adding, “He added real leadership to our defensive unit. He is a top contender for a future professional opportunity.”