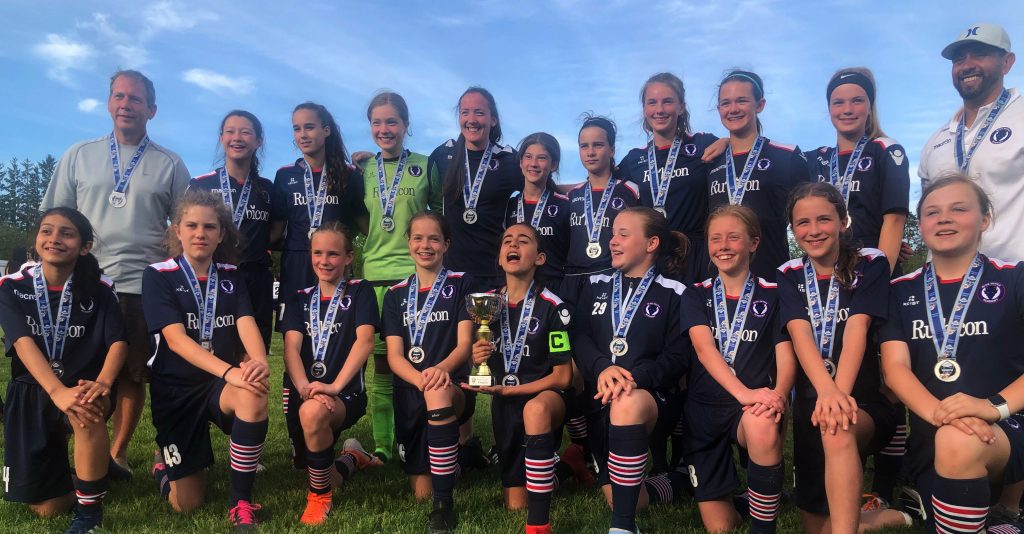 Oakville, ON — Becoming a champion is a process. By no means is it a simple one at that, it usually involves learning lessons the hard way. Losing. When we lose we are forced to break down what we know about ourselves and rebuild from the knowledge base that we have formed along the way. The Oakville Blue Devils 2006 Girls learned some very valuable lessons this season.

In soccer, like most sports, actual competitive gameplay accounts for less than 25% of the total time a team spends together. As a group, the way that time is spent together is where they grow, not just as athletes but has people. Head Coach Leanne Forker knows all about developing team spirit playing for the Oakville Blue Devils FC first team, and in the Scottish Premier League previous to that, “At the beginning of the season it was obvious there was a divide between the squad, as we’d brought two separate teams together. You could see in training they would be passing the ball amongst their groups separate from each other.”

Falling back on her years of experience in the game Forker knew exactly what had to be done. “So from there we made sure we had team building sessions every month like trips to Laser Quest or lunches and dinners after games, and then families started to make their own homes available for parties, and games nights. The girls even got a walkthrough of the League1 Women’s Dressing Rooms at Sheridan College. We really worked on making a strong bond, and you could tell half-way through the season how friendly they were with each other, it was hard to get them away at the end of a session, it was amazing to see! The girls never wanted to miss a training session it created quite a buzz” With this newly formed bond results began to follow, “The girls started to play for each other and not just for themselves, and they started playing very, very well not just in training but in tournaments.” Forker beams.

In the summer season of 2019 the Oakville Blue Devils 2006 Girls team entered in 5 tournaments. First, they travelled to Ohio in May to compete in the Nike Challenge Cup where rain prevented a winner being crowned. From there they travelled across Ontario making it into the Championship Finals in Barrie, Georgetown, Niagara Falls and finally Richmond Hill.

While they came up short of the immediate goals of winning the individual tournaments, they were successful in the coaches ambition of developing into stronger leaders and soccer players along the way. “These girls came out to training every week played for each other, and worked their socks off, and I’m really proud of them.”

The Oakville Blue Devils U13 Girls were the academy’s most decorated squad over the course of the 2019 outdoor season. They showed great team spirit in supporting the Women’s First Team, and were able to witness first-hand the level of play they will need to rise up to as their sporting journeys progress. This enthusiasm has not gone un-noticed. Through the challenges they faced they grew stronger as a group, and in doing so they grew individuals as well. Congratulations ladies. We are all proud of you. We are Oakville