ANTHONY NOVAK SIGNS WITH HAMILTON FORGE OF THE CPL 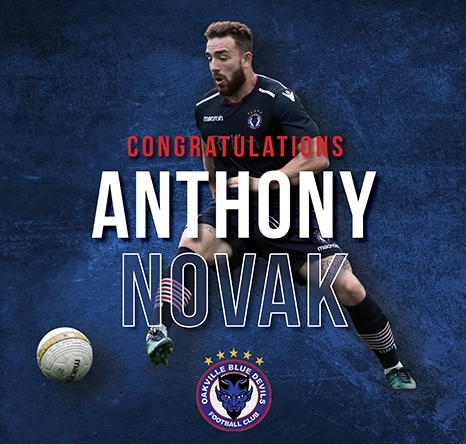 Oakville, ON — It is with great enthusiasm that the Oakville Blue Devils FC are able to announce Anthony Novak has signed his first professional contract this week with Hamilton’s Forge FC of the newly formed Canadian Premier League.
Anthony has been a member of the Oakville Blue Devils FC since 2015, and his skill set has been sharpened year after year due to his strong work ethic and workmanlike attitude. Anthony won two League1 Ontario Championships with the Blue Devils in 2015 and 2017 as well as an Interprovincial Championship. He participated in last season’s Canadian Championship series against PLSQ winners A.S. Blainsville. He later returned to Quebec part way through the 2018 season as a League1 Ontario All-Star. Anthony finished the League1 campaign in 2018 as the League’s top Goal Scorer notching 18 Goals in 16 Games, earning him the Golden Boot Award. The striker was also selected as an end of season First Team All-Star.
“Anthony is a product of our Academy which also supported him through his NCAA scholarship years before joining League1 Ontario in 2015, Anthony’s 10 goals in 2017 were instrumental in our championship run” stated a glowing Duncan Wilde, “We are very proud of his ongoing achievements, and wish him every success in 2019 and beyond.”
Forge FC will kick off the 2019 Canadian Premier League season at Tim Horton’s Field against York9 FC on April 27. Anthony is looking forward to the opportunity to impress his new coach and wow the local fanbase, but he recognizes the importance of his time spent with the Oakville Blue Devils FC and his personal growth and professional development during that time.
As Anthony prepares for the next stage of his career he looks back at his time with Oakville Blue Devils FC fondly “I have a lot of people at Oakville to thank for my experiences, and success as well.” He credits the coaching staff with preparing him for a career in the professional game. “Everything I know about football is due to them at this point, the way that I approach things, my mentality, it’s all down to Duncan (Wilde) and Billy (Steele)”
The Oakville Blue Devils FC will begin their 2019 season against Durham United on May 5th, at Sheridan College. If you think you might be the next Blue Devil you can still register for tryouts for both our Male and Female Academy Programming.
Click here to register.
We Are Oakville
Share Tweet Share Pin
Contact US
BLUE DEVILS FC
PO Box 69596
Oakville, ON L6J 7R4
(289) 273-0119
admin@bluedevils.ca
Weekdays 9am–5pm
Privacy Policy
Blog
Sitemap
CANADA
SOCCER